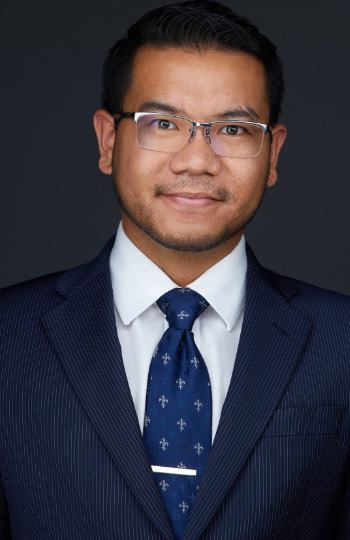 Edward Apolonio obtained his Juris Doctor degree from the University of Alberta, Faculty of Law in 2019. After graduating, Edward joined the firm as an articling student and is now an associate. Prior to law school, he obtained a Bachelor of Arts (Honors) degree in Political Science with First Class Honors.

With the guidance of criminal and civil lawyers in Edmonton, Edward also assisted community members from the Boyle Street Co-Op, who were dealing with various issues including criminal charges and tenancy issues. Many of the community members constantly deal with poverty, mental health challenges, homelessness, addiction, violence and marginalization. Apart from the excellent mentorship that Edward receives at Liberty Law, he is also being mentored by a former Provincial Court Criminal Judge and former Chief of the Alberta Human Rights Commission, Robert Philp Q.C. Together, Edward and Mr. Philp organize tours of the Edmonton Remand, EPS Forensic Lab, and Fort Saskatchewan Correctional Institution for law students. The tours serve as eye-opening and crucial experiences for those who wish to practice in criminal law.

Edward was born and raised in the Philippines. He studied at the University of the Philippines (Diliman) before moving to Canada. He started as a temporary foreign worker in the town of Barrhead, AB, before moving closer to Edmonton to pursue his childhood dream of becoming a criminal lawyer. Edward is fluent in Filipino/ Tagalog, understands the Ilocano dialect, and has helped members of the Filipino community navigate the criminal justice system.

Edward considers himself part of a helping profession. He believes that he can best serve the community and help individuals as a legal professional by fostering trust, and by creating meaningful and respectful relationships. With his background and experiences, Edward understands the personal challenges associated with being charged with a criminal offence and having to navigate the complex and daunting criminal justice system.

Edward now dedicates his practice exclusively to defending individuals charged with Criminal Code, drug, regulatory offences and traffic offences. Edward would be happy to assist you with your case.